Life comes at you fast. During this Thanksgiving week, we went from higher yields and the first Fed rate hike storyline to a big drop in bond yields and scary headlines on a new COVID variant, Omicron. How do we make sense of all this? In this type of economic environment is it even possible for Murfreesboro mortgage rates to get to 4% and can the Federal Reserve really hike rates in an aggressive fashion?

Let’s take a look at all these topics together.

Those who follow me on social know of my take on the first Fed rate hike and what needs to happen for this conversation to really take place. My rule of thumb has always been when working from a zero interest rate policy, the 2-year yield needs to be above 0.56% to have an honest discussion about this. Recently, that milestone was finally reached — only to be taken off the table with this new news about Omicron.

Here is the 2-year yield before the headline on the new variant: 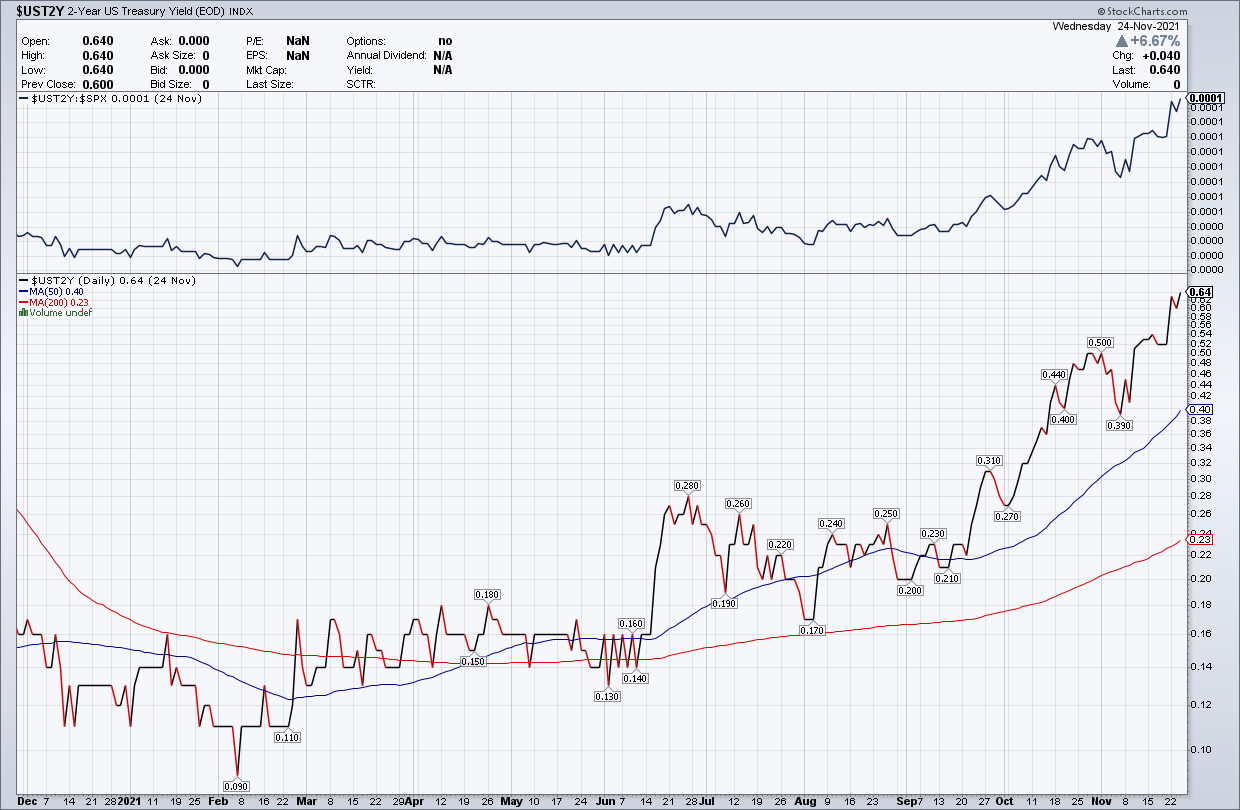 The dollar has been making a move higher, but nothing too spectacular yet. I know some are in the camp that would believe that if the dollar gets too strong then it can crush commodity prices, much as it did in 2014-2015 with oil prices.

As we can see below, oil prices got rocked as the dollar was getting stronger before the first Fed rate hike. The reality is that world economies don’t like the U.S. dollar getting too strong.

Currently, oil prices are down roughly $15 from the recent peak. For me personally, I wouldn’t put any weight on the first Fed rate hike until we can clearly get above 0.56% and stay above there with duration. 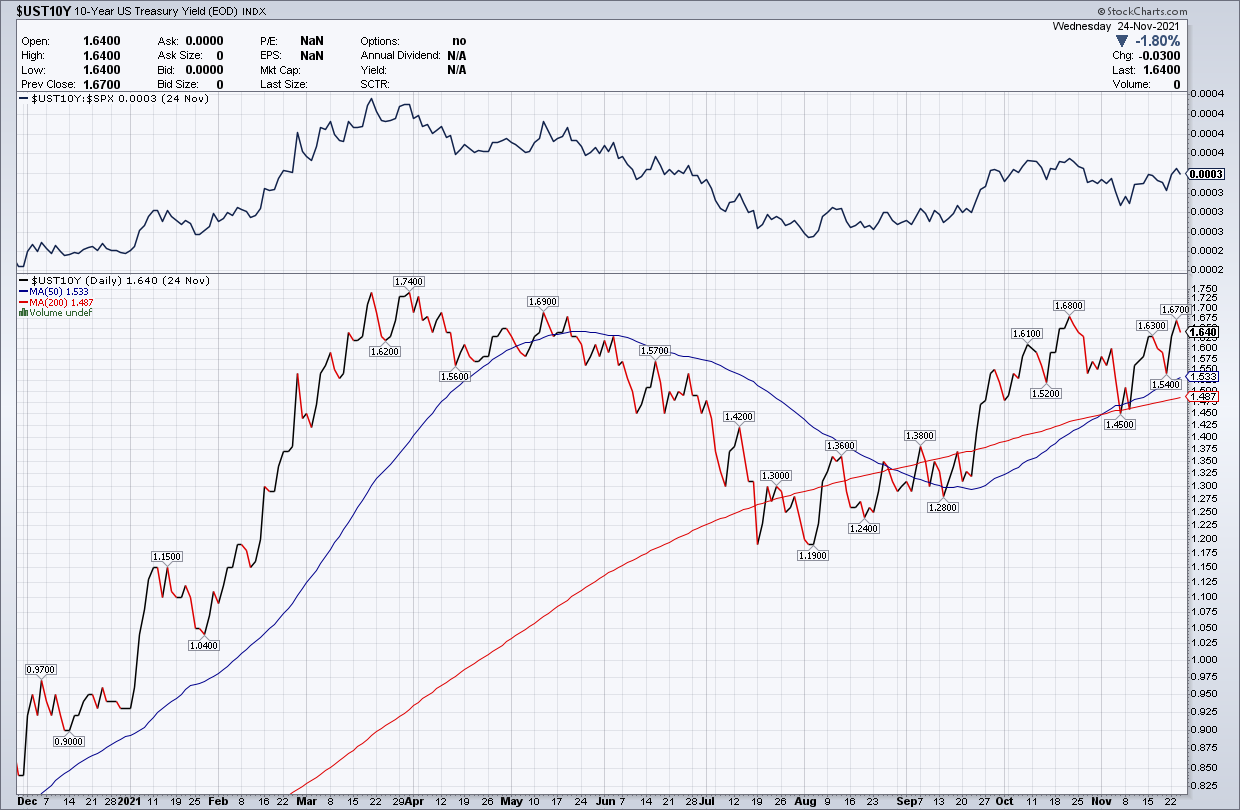 Let me remind everyone that even In 2021, we had the hottest economic and inflation data in a long time, along with the most flaming year-over-year inflation data. Also, even with the talks about the taper, near $30 trillion in federal debt and rate hike discussion; the 10-year yield has not had a day in 2021 even to attempt to challenge my critical 1.94% level yet. I recently wrote an article about why rates have been hard to get to 4%; the trend is your friend, son!

In a recent podcast with Sarah Wheeler — called The Rundown, it will be a weekly event — I talked about how I might be the one person in America talking about lower rates in 2022. It’s a bit of a tease of my 2022 forecast, coming at the end of December. Listen here.

Two things I’m keeping an eye on that haven’t happened concern the financial markets and the 10-year yield.

This typically would lead money into the bond market and send yields lower. We have had times when the market does pull back because of higher yields. However, to this point, we haven’t had a market correction, which was common in the previous expansion, which was the longest economic and jobs expansion in history. The markets will eventually act normal at some point, so money can still go into bonds and even take it below 1%.

2. The St. Louis Financial Stress Index has been bored out of its mind, and this also can’t last forever.

The black line of zero is considered normal stress. We have had times that the markets acted up and got us above zero without a recession. However, as you can see, not much is happening lately. 2021 reminds me a lot of 2017 when the financial markets were fine, only to get a lot of drama in 2018-2019 due to the trade war tap dance discussions.

We have one more month left in 2021, but you get where I am going with this. We just had the best economic growth in a very long time, the hottest inflation data in a very long time and no real market drama as well. Even with all that, the 10-year yield has not been able to even test 1.94%. The economic rate of growth has peaked in 2021 and inflation data won’t stay this hot unless wage growth takes off and we consistently have supply issues for a long time. Knowing this, do you still believe rates are going to go significantly higher in 2022?

The economy with a new COVID wave and omicron variant

One thing that I have stressed during the U.S. economic recovery is that we have learned to consume goods and services with an active virus infecting and killing us. This is might sound very strange, but it’s an important factor to remember. The initial fear of the virus can no longer be replicated because we went from a normal calm state with the longest expansion ever into a free-fall dive because as an economy we froze. The multiple surges in cases, while not optimal for a full fluid economy, did not stop the recovery from happening.

As you can see below, retail sales have taken off in a fashion that not even I thought could be possible for this long duration without moderation.

While I still expect to see a moderation in this data line, the fact that retail sales are still on fire shows how well the U.S. consumer is doing. I touched on this recently in an article on why Murfreesboro mortgage debt in America is great again. The cash flow of American homeowners with the nested equity built-in is the best ever on record.

The American consumer is in good shape and household formation demographics mean we have enough people to keep this expansion going. However, two things are different going into 2022 than what we had in 2020-2021:

While the personal savings data is still very healthy currently, the excess savings have been drawn down, and as you can see with retail sales, people have been spending. The excess dollars in the economy from disaster relief are no longer in the system.

Also, while disposable personal income is at very healthy levels as well, the excess from the disaster relief is also gone from this data line. It doesn’t look like there is any more appetite for additional disaster relief with midterms just around the corner.

It’s evident that Americans’ excess savings have been spent; however, don’t forget that millions of American jobs have returned. The jobless claims data is now back to levels we last saw in 1969.

With over 10 million ob openings!

We are still working our way back to get all the jobs lost to COVID-19, which I still believe we can get back to by September of 2022 or earlier.

As you can see above, even though the disaster relief has already been spent in the economy, we are on much better footing today than what we experienced in March of 2020. When the economy is getting noticeably weaker we do have way to track this, I wrote about this recently on HousingWire.

For now, enjoy your Thanksgiving holiday weekend, be smart and have fun! When the 2-year yields get above 0.56% with duration heading toward 0.80%, then we can have a real first Fed rate hike talk. The 10-year yield hasn’t been able to go above 2% for a very long time and Murfreesboro mortgage rates over 4% seem like a distant memory. We will cross all these bridges together, one day at a time, and now with a weekly podcast on HousingWire, I can provide weekly updates.